This debut CD from the award-winning Danish recorder player Louise Hjorth displays her talents in both contemporary and early music, the latter mostly transcriptions on the 2nd of the two CDs.  Three of the early pieces are performed by Duo 1702, Hjorth’s partnership with organist Katrine Immerkjær Kristiansen, the other two with the harpsichord, guitar and gamba of Jutlander Baroque.  The duo pieces played with chamber organ are particularly attractive, the gentle chiff of the organ nicely balanced by the tonguing of the recorder player.   In all the pieces Hjorth’s sensitive approach to musical line and articulation is apparent, as is her virtuosity.  But, for the real test of that virtuosity, you need to listen to some of the solo modern pieces on the first CD, notably Moritz Eggert’s Ausser Atem which uses three recorders, two played together with the human voice.  One piece on CD 1 of early music interest is Louise Hjorth’s evocative interpretation of Hildegard von Bingen’s Ave, Generoso for solo recorder and live electronics (loops, delay etc) controlled by an effects pedal.  Two examples of the Galant style are represented by Ræhs, a Danish composer from Aarhus, and the German Scheibe, who spent 40 years as Capellmeister to the Danish court.  The Stylus phantasticus style is heard in the pieces by Schmelzer and Mealli.  This is a very attractive CD, with the benefit if demonstrating the attractive of ‘period instruments’ to modern composers. 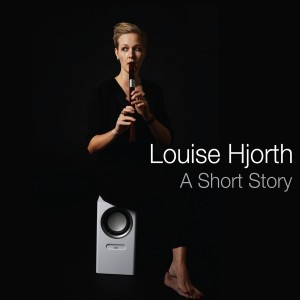 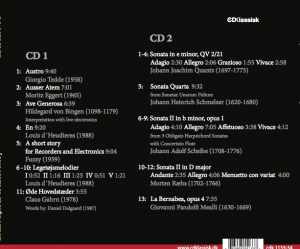